Jesus in the Sand

Pictures from a beach in Maryland. Isn't the artwork awesome? The artist, Randy Hofman, creates new sculptures each day as the ocean washes away his work. See below for more information on these truly inspirational creations! 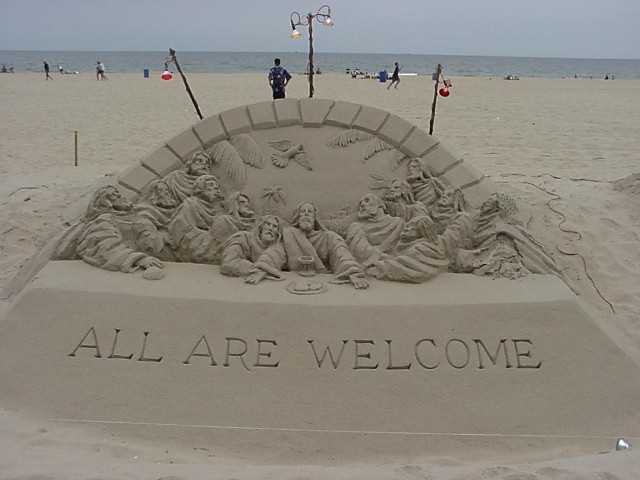 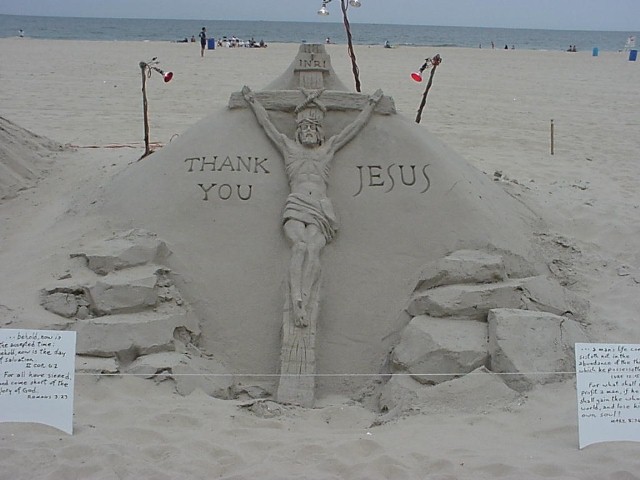 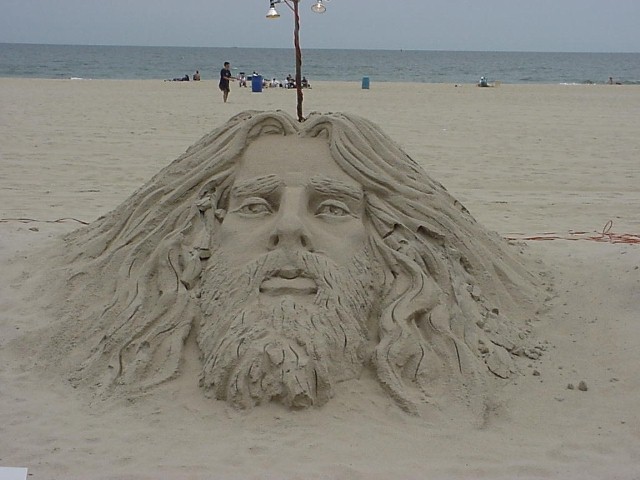 One of our readers, Mardi, sent me the following e-mail:

I received an e-mail with the very same pictures of the religious sand sculptures from a beach in Maryland that you have on your website. Figuring that the beach in Maryland was probably Ocean City, Maryland, I e-mailed Stewart Dobson, the editor of Ocean City Today, the newspaper for Ocean City, for more information about the "sand sculpture artist." He sent me a copy of an article that ran in his newspaper in August of 2002 which will shed more light on this talented artist--Randy Hofman. It is as follows:

If you've strolled Ocean City's Boardwalk during the last 20 years, chances are you've seen the sand sculptures that Randy Hofman creates in front of the Plim Plaza Hotel on the beach at Second Street.

The sculptures are 8 to 20 feet across and have a biblical theme, Christ on the cross, The Last Supper, Jesus praying, David and Goliath are favorites.

An ordained minister since 1985, Hofman views the sand sculptures as his ministry. "The messages show people that God is reaching out to us," Hofman said. "They have to be short and simple so people can easily read and understand them ... like a billboard."

Hofman gives away a small, 32-page Bible booklet to anyone who wants one and averages 50,000 takers each summer. Since he started doing this in the mid-1980s, he has distributed about 800,000 booklets.

Most observers treat Hofman's sculptures with respect, if not awe. Some stop at the site to pray. If invited, Hofman may join them. Passers-by often take snapshots of the sculptures and placards in front of them. The displays are lit at night but not for photography. For those who'd like a decent picture of his work, Hofman recently created a Web site, www.randyhofman.com, which contains dozens of color photos of his sculptures. [emphasis added]

Many people drop a nickel, quarter or dollar in a glass container in front of the display on the beach. Hofman depends on these donations, plus earnings from oil painting, for his living and mission expenses.

Some people leave notes. One woman wrote that her son had been killed in a car accident but had one of Hofman's Bible booklets with him when he died. "That brought her peace," Hofman said.

In 1989, a Baltimore man who vacationed in Argentina, offered to pay Hofman's expenses if he'd go there and replicate his sand sculptures. "I accepted and spent several weeks creating sand sculptures on the beach at Mar del Plata," he said. "I enjoyed it so much that I went back later at my own expense."

Not everyone respects religious sand sculptures. Three years ago, a young couple came by and the girl urged her boyfriend to jump on one of Hofman's creations. He did and the couple ran away. "The police arrested them for disturbing the peace," Hofman said. "It's good they did. A crowd saw what happened and went crazy."

Hofman has been playing or working on Ocean City's beach since he was a small child. "I grew up outside of Washington, D.C. and our family always came to Ocean City for vacations. I was one of nine children and we all played in the sand here like other kids." He also played in a sand box at home with his brothers. "I liked to make roads, tunnels and sand castles but never thought I'd be making sand sculptures," he said.

Hofman studied advertising design and visual communications for two years at Pratt Institute in Brooklyn, N.Y. before coming to Ocean City on his own in 1974. He created color chalk murals on concrete next to the Boardwalk and learned sand sculpture from another Ocean City resident.

Much has changed since the early years. "When I started, Ocean City emptied out on Labor Day. Now I work on the beach from Easter until October." One sculpture a day was Hofman's limit at first because he lacked water and had to dig down past the dry, hot surface sand for moist sand. He worked at night after the sun went down so his sculptures would retain moisture. Usually, by noon the next day, the sculpture had dried out and disintegrated and he had to start over. This part of the job is easier now because John and Hale Harrison, owners of the Plim Plaza, supply him with water and electricity.

Hofman's only sculpting tool, in addition to his hands, is a white plastic knife used for picking crabs, courtesy of a nearby restaurant, the Mug & Mallet. The knife is handy for drawing fine lines and sharpening images.

Youngsters attending SonSpot, an outreach mission on Worcester Street, do much of Hofman's sand digging now. "The kids are great," he said. "They come here from six or seven mid-Atlantic states and this is part of their mission." SonSpot's founder, Gary Steiger, pastor Dick Sands and his wife, Marsha, keep an eye on Hofman's site when he's busy elsewhere.

Hofman presents four sculptures at a time now and they're good for a week or more because he sprays a light, white glue on them. He learned the technique from some Californians who built a huge, promotional sand castle here in the '90s. "I was concerned about the environment but was told the process is okay," he said.

He feels sand sculpturing is easy because there are few rules. "Just use clean, moist sand and don't let dry sand mix through it. It's like baking a cake. Use good ingredients."

Age challenges the physical aspect, admits Hofman, now 50. "It strains the back and gives me giant leg cramps, so I take more breaks now. Lord willing, I'd like to continue for years to come."

Aches and pains are no problem with his other passion, oil painting. Hofman lives with his wife, Marilynne, in Ocean Pines, and paints in his studio in Newark, Md. He recently completed four undersea life murals, each four feet wide, for the Coral Reef Cafe at the Holiday Inn at 17th street and the Boardwalk. Seventeen of his oil paintings also are on display in the lobby of the Plim Plaza.

Thanks, Mardi, for taking the time to send us this information. We love getting contributions from our readers!