The world is grieving.

If there really is a God, how could He allow this to happen? Where was He?

How many of us have heard that question?

"Where was your God when the World Trade Center and the Pentagon was attacked?"

He was trying to discourage anyone from taking these flights. Those four flights together held over 1000 passengers and there were only 266 aboard.

He was on four commercial flights giving terrified passengers the ability to stay calm. Not one of the family members who were called by a loved one on one of the high-jacked planes said that passengers were screaming in the background.

On one of the flights He was giving strength to passengers to try to overtake the high-jackers.

He was busy trying to create obstacles for employees at the World Trade Center. After all, only around 20,000 were at the towers when the first jet hit. Since the buildings held over 50,000 workers, this was a Miracle in itself. How many of the people who were employed at the World Trade Center told the media that they were late for work or they had traffic delays?

He was holding up two 110-story buildings so that two-thirds of the workers "could" get out.

It's amazing that the top of the towers didn't topple when the jets impacted. And when they did fall, they fell inward. God didn't allow them to topple over, as many more lives would have been lost. And when the buildings went down, my God picked up almost 6,000 of His children and carried them home with Him! Reassuring His frighten children that the worst was over and the best was yet to come.

He sat down and cried that 19 of His children could have so much hate in their hearts. That they didn't choose Him, but another god that doesn't exist, and now they are lost forever.

He sent His children, that are best trained for this disaster and had them save the few that were still alive, but unable to help themselves. And then sent many others to help in anyway they were needed. 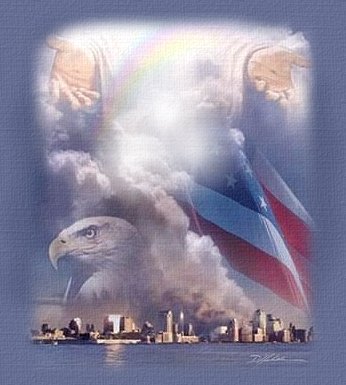 He still wasn't finished though...

He held the loved ones that were left behind in His arms. He comforts them daily. His other children are given the strength to reach out to them and help them in any way they can. And I believe He will continue to help us in what is yet to come.

He will give the people in charge of this great nation the strength and the wisdom to do the right thing.

He would never leave us in our time of need.

So when anyone asks, "Where was your God on September 11?" you can say, "He was everywhere!"

And yes, although this is without a doubt the worst thing we have seen in our lives, I see God's miracles in every bit of it.

Keep praying for those who don't believe in God, every chance you have.

I can't imagine going through such a difficult time and not believing in God. Life would be hopeless.

May God Bless Our World ...