After a lengthy round of speeches, the candidates worked their way through the crowd--shaking hands, kissing babies and beaming mightily.

Suddenly, the skies opened and it began to rain.

A popular bar had a new robotic bartender installed. A guy came in for a drink and the robot asked him, "What's your IQ?"

The man replied, "130." So the robot proceeded to make conversation about physics, astronomy, investments, insurance, and so on. The man listened intently and thought, "This is really cool."

Another guy came in for a drink and the robot asked him, "What's your IQ?"

Late one night, a mugger wearing a ski mask jumped into the path of a well-dressed man and stuck a gun in his ribs. "Give me your money", he demanded. Indignant, the affluent man replied, "You can't do this - I'm a United States Congressman!" "In that case," replied the mugger, "give me MY money."

A shepherd was tending his flock in a remote pasture when suddenly a brand-new Jeep Cherokee appeared out of a dust cloud, advanced toward him and stopped.

The driver, a 24-year-old young man wearing a Brioni suit, Gucci shoes, Ray Ban sunglasses and a YSL tie, leaned out of the window and asked our shepherd, "If I can tell you exactly how many sheep you have in your flock, will you give me one?"

FLORIDA - In a satirical protest against the political establishment, Percy the dog is running for congress in Florda against Secretary of State Katherine Harris.

Percy, a border collie mix, will be a write-in candidate in the Republican primary, has his own website, and has even been out to meet voters.

The tribal wisdom of the Dakota Indians, passed on from generation to generation, says that when you discover that you are riding a dead horse, the best strategy is to dismount.

In modern education and government, however, a whole range of far more advanced strategies are often employed, such as:

You think "proletariat" is a type of cheese.

You've tried to argue that poverty could be abolished if people were just allowed to keep more of their minimum wage.

You've ever tried to prove Jesus was a capitalist and opposed to welfare.

Ronald Reagan: "If I listened to Michael Dukakis long enough I would be convinced that we're in an economic downturn and people are homeless and going without food and medical attention and that we've got to do something about the unemployed."

George Bush, during his first Presidential campaign: "I want to make sure everybody who has a job wants a job"

Richard Nixon, while attending Charles De Gaulle's funeral: "This is a great day for France!"

George Bush, talking about drug abuse to a group of students: "Now, like, I'm President. It would be pretty hard for some drug guy to come into the White House and start offering it up, you know? ... I bet if they did, I hope I would say, 'Hey, get lost. We don't want any of that.'"

"The Canadian government continues to say they will not help us if we go to war with Iraq. However, the prime minister of Canada said he'd like to help, but he's pretty sure that last time he checked, Canada had no army."
- Conan O'Brien

The president of a certain country went to the interior of that country where there was no electricity, poor roads, and no form of telecommunication, to give his campaign speech. The people spoke a different dialect to the native one.

"We, the ruling party," said the president, "promise to provide electricity for the entire district."

Upon hearing the president's words, the people cheered, "Fombre!"

Ever want to call someone stupid, but want to do it in a way that is politically correct? Here are some great suggestions sent in by various people:

No Charge For The Haircut

A priest walked into a barber shop in Washington, D.C. After he got his haircut, he asked how much it would be. The barber said, "No charge. I consider it a service to the Lord."

The next morning, the barber came to work and there were 12 prayer books and a thank you note from the priest in front of the door.

Read more: No Charge For The...

The Lord spoke to Noah and said, "Noah, in six months I am going to make it rain until the whole world is covered with water and all the evil things are destroyed. But, I want to save a few good people and two of every living thing on the planet. I am ordering you to build an ark." And, in a flash of lightning, he delivered the specifications for the ark.

"Okay," Noah said, trembling with fear and fumbling with the blueprints, "I'm your man." 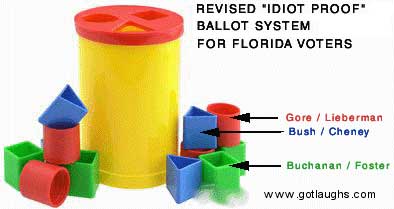 The names Lincoln and Kennedy each contain seven letters.

I am responding to your letter denying the deduction for two of the three dependents I claimed on my 1994 Federal Tax return. Thank you.

I have questioned whether or not these are my children for years. They are evil and expensive. It's only fair that, since they are minors and no longer my responsibility, the government should know something about them and what to expect over the next year. Please do not try to reassign them to me next year and reinstate the deduction. They are yours!

In God We Trust 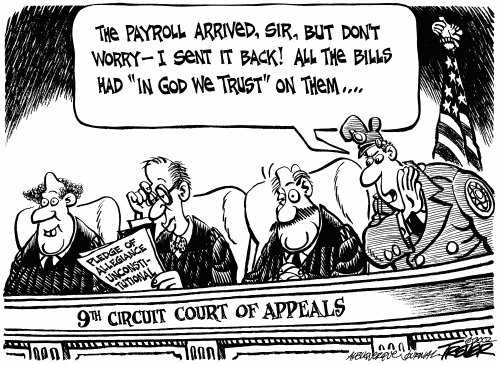 Gore And Bush At Brunch

Gore and Bush were in a restaurant ordering brunch. The waitress asks Gore what he would like to order. After looking at the menu, Al says, "I would like Eggs Benedict."

Waitress sys, "Fine, and what will you have Governor Bush?"

Perusing the menu, George says, "Well, I think I'd like to have a quickie."